The breast ptosis correction with implants is a surgical procedure that makes it possible to reshape and give more volume to the breasts. It consists in particular of removing excess skin, so as to give the breasts, which are lifted, a more harmonious and shapely appearance. The addition of implants is necessary to give “too small” breasts a more satisfactory size.

The surgeon will define the level of ptosis by the degree of breast droop and, depending on this, will define what type of incision is necessary to lift the skin. Most often it will also be necessary to fit a breast implant, that is to say a breast prosthesis to restore shape and volume to the breast.

Women who suffer from breast ptosis, and who are bothered by their drooping breasts, have every interest in resorting to this surgical procedure. It will enhance their breasts and prevent stretching of the skin around the chest. Women who, in addition, find the size of their breasts insufficient, can undergo a simultaneous breast augmentation procedure using implants to restore volume.

What happens before the operation?

You will need to make an appointment for a consultation with a doctor. It will be necessary to stop taking certain drugs which, such as aspirin or anti-inflammatory drugs, promote blood flow and, therefore, the risk of bleeding. On the other hand, it may be advisable to take, in the days preceding the operation, drugs which can reduce any swelling or post-operative bleeding (homeopathy). Fasting for several hours before the operation is essential.

The breast ptosis correction associated with breast augmentation by implant is an operation whose duration varies depending on the extent of the breast ptosis. It takes an average of two hours of surgery and takes place under general anesthesia. In addition, the procedure takes place in a seated position so that the surgeon can position the implants correctly and harmoniously with respect to the patient’s morphology. The installation of a drain is not systematic, even exceptional. It is the surgeon who decides whether or not to place it based on the amount of bleeding during the operation.

What precautions should be taken after the operation?

The dressings should be changed daily for a week. Physical effort, and any practicing of sport, should be avoided for one month. Baths are not allowed for the same period of time and nor is the carrying of heavy loads. A week’s rest is necessary after the operation. In addition, the scars linked to the operation, which are always minimal, should not be exposed to the sun. A compression bra, generally opening from the front, as well as a breast compression band constitutes essential protection for the operated breasts and for keeping the implants in place. The pain is moderate and generally well relieved by the painkillers prescribed by the surgeon.

What are the risks of the operation?

Although they are rare, complications can arise after a breast ptosis procedure associated with a breast enlargement using implants.

These are mainly risks of hematomas occurring within the first few hours after the operation and which may require a resumption of surgery in the operating room. There can also be a question of infection, treated with antibiotics, which can lead to the removal of a prosthesis in the most serious cases. As in the installation of breast implants alone, there are risks concerning the displacement of an implant, an implant rupturing, or the development of a periprosthetic capsule (reaction by the body to the implant with the breast becoming hard and painful and, in important cases, a deformation of the implant resulting in adhesive capsulitis). There can also occur, in rare cases, skin necrosis which prolongs the healing period. 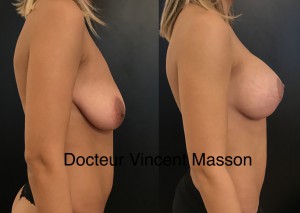