Before and after photos of breast lipofilling

Lipofilling is a modern plastic surgery technique that involves removing fat from one place in the body and injecting it in another place.

The first cases described date back to the beginning of the last century but the technique was really perfected in 1983 by a Frenchman, Doctor Fournier, and then improved by an American in 1995, Doctor Coleman (hence the name, Coleman’s technique, which is sometimes used).

This technique has now been in use for 25 years and it has become reliable, reproducible and safe. It is an interesting alternative to breast augmentation by prosthesis provided you understand all the differences between the two techniques. 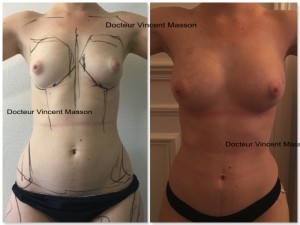 Breast lipofilling by suction from the sides

Fat can be removed from the buttocks, saddlebags, hips, sides, love handles, belly, abdomen, knees, thighs, arms, chin, in short, almost everywhere it is present. The point is to associate breast augmentation with a redesigning of the figure. In all cases, the liposuction scar will be hidden in a fold or a shadow area and therefore be almost invisible.

The fat is then purified with a gentle centrifugation technique which keeps the fat cells (adipocytes) but removes unnecessary cell debris, oil and blood. An alternative to centrifugation is the filtration technique, of which several systems exist. The best known is PureGraft. The fat is not centrifuged then but filtered.

As a general rule, the ratio of the aspirated fat to the fat usable for lipofilling is 1 to 3 (900 cc of aspirated fat is necessary to inject 300 cc of purified fat). With absorption being 30% on average, there will remain in the end around 200 cc of fat out of the 900 cc initially sampled.

Sometimes two sessions of lipofilling, or even more, will be necessary. The fat that is taken will then remain for life, it is not absorbable. Lipofilling is therefore a definitive and natural technique. Only a very significant loss of weight can vary the quantity of fat present (the number of fat cells remains the same but they experience a reduction in size under the effects of significant weight loss).

The operation takes place under general anesthesia and lasts between 2 and 3 hours depending on the amount of fat to be removed and re-injected. Hospitalization lasts for 24 hours on average. The post-operative effects are not difficult to manage (aches and pains easily controlled by analgesics for the first week, possible bruising for 10 days, soft pants to wear for 4 weeks on the lipo-aspirated areas, 10 days off work on average).

What are the advantages of breast lipofilling compared to breast augmentation by prosthesis?

What are the disadvantages of breast lipofilling compared to breast augmentation by prosthesis? 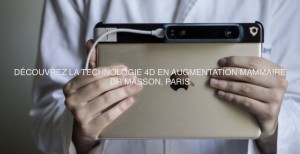 Dr Masson’s office is the very first in Paris to be equipped with 4D Eve 4.0 scanner technology.

When you come for a breast lipofilling consultation you will be able to use augmented reality to discover how your new breasts will look.

Breast augmentation by lipofilling – monitoring and risk of breast cancer?

One in 8 women will experience breast cancer in their lifetime. The most common breast cancer (invasive ductal carcinoma) appears on mammograms in the form of microcalcifications.

The fat injected into the breast also takes on the appearance of microcalcifications (linked to fibrosis and scarring, as after any breast surgery). The risk of confusing calcifications linked to breast cancer with those linked to lipofilling has long led people to think that this technique should be avoided.

In practice, calcifications linked to lipofilling are different from those observed during breast cancer for an experienced radiologist.

With more than 20 years of hindsight concerning the procedure, it is worth remembering that in 2015 a breast lipofilling carried out correctly by a specialized plastic surgeon does not entrain any diagnostic difficulty of breast cancer for an experienced and specialized radiologist. Similarly, there is no evidence in favor of an increase in the rate of breast cancer in patients who have undergone breast lipofilling. A pre-operative imaging assessment by a specialized radiologist (mammography and ultrasound) is essential before the operation plus every year afterwards as a precaution given the frequency of breast cancer in women. It was formerly recommended not to carry out lipofilling in aesthetic breast augmentation in women over 35 years of age. However, this is no longer the case according to the report by the HAS (High Authority for Health) from April 2015. This age limit no longer exists.

Composite breast augmentation, the combination of the two techniques.

One possibility is to combine a conventional breast augmentation with lipofilling. This operative indication is interesting for very thin patients with visible ribs in order to camouflage the upper pole of the breast and improve the result after the intervention. Often a small volume (maximum 300 cc) breast implant is used and is placed not as usual in dual plane but in the pre-muscle position (in front of the pectoral muscle). Liposuction is ideally performed on the sides (love handles) and hips (saddle bags) and the fat is reinjected into the upper internal quadrant of the breast. Visit the page dedicated to this procedure here.

The price for breast lipofilling is from 7000 euros.

The price obviously varies according to the quantity of fat to be removed, the possible number of sampling areas, and the quantity to be reinjected.