Having invaginated or inverted nipples is a common problem that affects up to 10% of women. 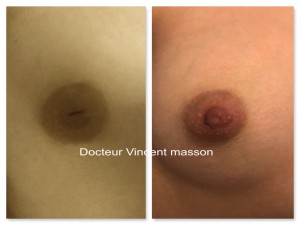 Invaginated nipples, before and after treatment.

The nipple is tucked in and buried inside the areola, either all the time, or intermittently (it goes in and out). In the most important cases it is impossible to protract the nipple and in more than half of patients the malformation is bilateral, that is to say that it affects both breasts.

There can be several consequences when a nipple turns inside out: aesthetic dissatisfaction, development of a complex, breastfeeding difficulties, discharge, odors, and sometimes pain. The nipple may also become itchy (pruritus).

What are the causes of inverted or Invaginated nipples?

Several causes are possible, whether associated or not:

What are the surgical treatments available for an inverted nipple?

Doctor Masson, your cosmetic surgeon, after examining you will be able to explain to you which technique is possible in your case. 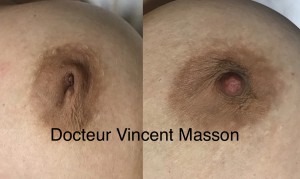 How is the operation performed?

A consultation with the surgeon is essential before any intervention.
The operation can be carried out at the end of adolescence.
Stopping smoking is strongly recommended at least 3 weeks before the operation because of the associated potential complications and scarring issues.
A mammogram is necessary to rule out breast cancer in stage C.
Hospitalization is very short, in the vast majority of cases the surgery is performed on an outpatient basis (entry in the morning and exit at the end of the day).
Anesthesia is most often local, but sometimes additional sedation is performed by an anesthesiologist. Some very anxious patients are operated under short general anesthesia.
The procedure lasts between 15 and 30 minutes.
The pains are very moderate, the sutures fall out alone and the post-operative care is simple (a daily shower of the operated area, disinfection and placement of a bandage for a week).
Time off work from 24 to 48 hours can be justified and an exemption from sports of 15 days.
The result is visible immediately but due to post-operative swelling and the healing time, it is considered that the final result is acquired after 1 to 2 months.
The scars are very discreet on the areola and almost invisible after a few months.

What are the potential complications?

Complications are rare.
The main complicating factor is represented by smoking.
A change in sensitivity is normal for the first few days but it can last several months.
A recurrence is sometimes possible, as well as an under-correction or an asymmetry.
The most serious, fortunately extremely rare, complication is complete necrosis of the nipple which requires a subsequent reconstruction.

Are there any alternatives to surgery?

Some commercially available suction devices (Niplette) can sometimes have an effect, even if it is only transitory. Breastfeeding is a natural method that can work for stages A and B.

In stages A and B (the nipple can be protracted), suckling the newborn can sometimes correct the problem, at least while breastfeeding. In major cases of invaginated nipples (stage C, the nipple never be protracted) breastfeeding will be impossible because the newborn will not be able to grasp the nipple and, therefore, suckle. It is therefore possible to have surgery before pregnancy. It is generally advised to undergo the operation at least one year before the beginning of a pregnancy. Depending on the operating technique and the healing capacity of the milk ducts and their potential for repermeation, breastfeeding may be possible. But in 20% of cases breastfeeding will be impossible (poor healing or re-closing of the ducts).

How much does an invaginated nipple treatment cost?

The price of an invaginated nipple treatment for aesthetic reasons starts from 1000 euros. 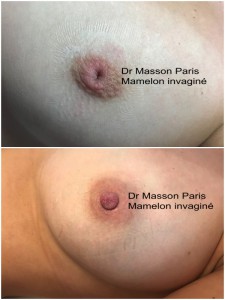