Definition of the lip lift or upper lip lift

The lip lift is a cosmetic surgery operation where the objective is to shorten the white lip (space between the nose and the mouth) that is too long and to raise and re-curl the red lip that is too thin, thus making the mouth look and feel more sensual. The philtrum is redesigned, as well as the cupid’s bow.

Why have an upper lip lift?

Some patients have a very thin and undefined upper red lip, giving a rather sad and severe appearance to the face (a pinched mouth, teeth permanently hidden). A voluptuous and well accentuated upper red lip gives an aspect to the face that is altogether happier and more radiant, carnal, sensual and seductive. The smile is also more expressive.

In all cases, the lifting of the upper lip has two effects: shortening the white upper lip and making the red part of the lip more visible by pulling it both upwards and outwards. The mouth thus appears younger and more expressive with a beautiful accentuated profile.

What happens before the operation?

Two consultations with the cosmetic surgeon are necessary before performing the operation in order to discuss the benefits, risks and procedures associated with the intervention. The operation is normally performed under local anesthesia, sometimes assisted by sedation. In rare cases, general anesthesia may be considered.

Consultation with an anesthesiologist will be necessary if general anesthesia or sedation takes place. Finally, in order to limit the risks of poor healing, it is essential to stop smoking at least one month before the operation and not to start again after it.

The upper lip lift operation is an outpatient procedure, this means that the patient can return home the same evening. It takes place in two stages. Firstly, anesthesia is administered, which can be either general or local, sometimes assisted by sedation. Then the operation itself which generally lasts from 45 minutes to 1 hour. It involves removing a crescent of skin under the nose and hiding the scar flush with it, in an area of ​​natural shade. The secret lies in the deep attachment of the skin and muscle to a supporting tissue such as the jaw bone or the nasal septum (cartilage) otherwise the lip risks descending downwards again in a few months. The threads in place are removed after 7 days.

What precautions should be taken after the operation?

Like any operation, an upper lip lift procedure is stressful for the body and it is therefore advisable to plan a few days of rest after the operation. In addition, the upper lip is often slightly swollen (edema) following the intervention and this lasts for a period of approximately one week.

It can be a little embarrassing to eat in the days that follow the operation. Applying ice to the swelling can speed up the return to normal size and reduce any pain. Pain can be effectively relieved by taking the painkillers prescribed by the surgeon.

What are the risks of the operation?

The lifting of the upper lip is a relatively minimally invasive procedure and presents relatively little risk. However, in a few exceptional cases, there may be bleeding, most often minor, or the development of infections. From an aesthetic point of view, the scar may sometimes be more visible than expected if it is not well hidden inside the nostrils and in the nasal folds. 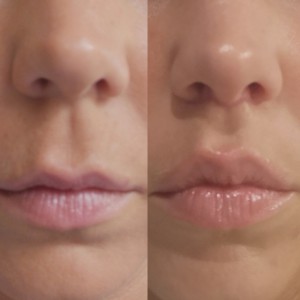 Before and after an upper lip lift operation.